Just like many around the world, even Princess Beatrice and Edoardo Mapelli Mozzi’s wedding was affected by Covid-19. Instead of their original plan, perhaps to have a much larger wedding on 29 May, they married in a small private ceremony on 17 July at the Royal Chapel of All Saints in Windsor. Find out more.

Her grandparents, Her Majesty the Queen and Prince Phillip, the Duke of Edinburgh attended the small ceremony as well as the Duke and Duchess of York. Buckingham Palace released a statement on 18 July noting, ‘The couple decided to hold a small private ceremony with their parents and siblings following the postponement of their wedding in May. Working within government guidelines, the service was in keeping with the unique circumstances while enabling them to celebrate their wedding with their closest family.’

What was the original plan?

Originally, they were going to celebrate their May nuptials in the Chapel Royal at St James’s Plance, London, followed by a reception in the gardens at Buckingham Palace hosted by the Queen.

The public, however, seems to be delighted by the Princess’s smaller, more sustainable gathering, complete with raiding her grandmother’s closet!

Princess Beatrice, who is said to be very close to the Her Majesty the Queen, borrowed a dress designed by Norman Hartnell. The Queen wore the dress in 1962 at the Lawrence of Arabia premiere at the Odeon Leicester Square.

In the 20th century, Hartnell was a much sought-after designer, especially by the Windsors. he designed the Queen’s wedding dress and coronation gown as well as Princess Margarett’s wedding look.

To make the dress perfect for the Princess, Angela Kelly, the Queen’s own dressmaker, fitted the dress to the bride’s measurements, adding organza puff sleeves. The dress itself is made from ivory Peau De Soie taffeta, embellished with diamanté and trimmed with Duchess satin.

Princess Beatrice looked elated, relaxed, and radiant on her big day. The dress was a beautiful tribute to her grandmother as well as in keeping with leaner times for the British public.

Was there a second dress?

Many royal brides have changed dresses for a reception, but there’s no evidence that Princess Beatrice opted for a second gown.

The Duchess of Sussex, Megan, chose a Stella McCartney gown as her second dress; The Duchess of Cambridge, Kate, wore a second Sarah Burton for Alexander McQueen gown; and Princess Eugenie swapped her wedding dress for an elegant Grace-Kelley-esque gown designed by Zac Posen.

The Princess wore the Queen Mary Fringe tiara, the same tiara her grandmother, the Queen, wore on her wedding day to Prince Phillip, the Duke of Edinburgh.

Queen Mary of Teck was given the tiara as a necklace from Queen Victoria as a wedding present. Queen Mary liked to customise her jewellery so in 1893 she had Gerrard make the necklace into a kokoshnik-style tiara with 47 graduated rose-set tapering bars and 46 narrower spikes, all of which could be removed to be made into a necklace again.

The tiara was then passed down to the Queen mother and then was used as Her Majesty, The ‘something borrowed’ on her 1947 wedding day except the Queen accidentally unfastened the clasp, not knowing it was a necklace, and it ‘broke’. The Queen recalled, ‘The catch, which I didn’t know existed, it suddenly went. And I didn’t know it was a necklace, you see… I thought I’d broken it… We stuck it all together again, but I was rather alarmed.’

The only other royal to wear the tiara was the Queen’s daughter, Princess Anne, who wore it in 1973 for her wedding to Captain Mark Philips.

Edoardo wore a classing three-piece morning suit with grey trousers, a black velvet pointed lapel jacket, a blue button-up shirt, a blue silk tie, and a cream double-breasted shawl lapelled waistcoat. He wore a simple flower in his buttonhole (matching his waistcoat) and a white pocket-handkerchief.

Need an amazing look for your wedding?

Here are some of our latest blogs. 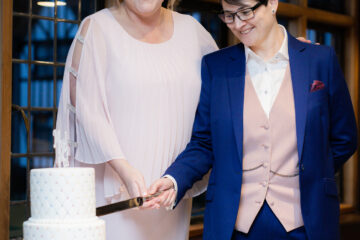 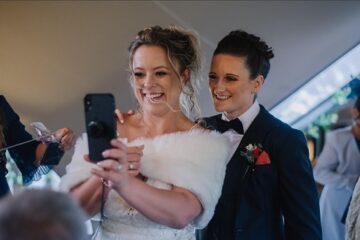 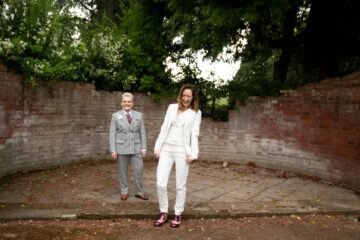