Graham opted for a classic two-piece dark suit with a burgundy button-up shirt for this episode. He looked smart as usual but not as bold.

Dwayne ‘The Rock’ Johnson shone in a bold update on the classic tuxedo. He wore a hot pink tuxedo jacket with shawl lapels and button detailing at the cuff, a crisp white tuxedo shirt with pleats and french cuffs, black tux trousers (without a stripe) and a black bow tie. He opted for polished, shiny black leather shoes and bright pink socks to match. Graham discussed the flair of his outfit and costar Kevin Hart touted that Graham didn’t comment on the wings on his jacket. As we see, suits get more notice than casual attire!

In this clip, Kevin Hart notes how he sees The Rock bonding with Jodie Whittaker over being ‘action stars’ when he isn’t.

Kevin Hart wore a colour-coordinated more casual outfit. He opted for tailored khaki trousers, a crisp white button-up shirt, and a zip-up embellished jacket in khaki green. The jacket had wings and feather-like detailing and he finished the look with white trainers.

Kevin discusses how the camel he had to ride the Jumanji film was racist and how he doesn’t like animals.

Jodie Whittaker wore a black jumpsuit with a red, black, and gold top attached. She wore ankle-strap stilettos, reminiscent of an updated 1920s shoe, with red detailing and red tie closure. She accessorised with a large gold cuff and slicked back her short hair to complete the look.

In this clip, Jodie talks about when a sac spider landed on her in her shoot in South Africa. Kevin Hart has an interesting follow-up commentary.

Sir Michael Palin, who was recently knighted, opted for a denim look. He wore a collarless denim button-up shirt and denim jeans, finished off with a brown belt. He smartened the look with a black notched lapel blazer. He wore fun black and colourful spotted socks with brown loafers.

What sort of outfit would you wear to The Graham Norton Show?

Let us know in the comments if you’d opt for a suit, a more casual outfit, or something else entirely. If you have an event coming up, contact our talented tailoring team to create your perfect look for your next event, your next wedding guest outfit, for your upcoming holiday party, or even your everyday suit in the office. Our high-quality suits come in a range of styles, fabrics, linings, and custom-made options. Impeccable tailoring at a reasonable price.

Want more Graham Norton Show looks and celebrity outfits? We publish blogs weekly about the show and other hot fashion topics. Discover some of our other posts below. 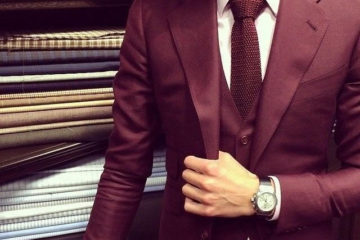