The 71st Primetime Emmys were held on 22nd September at the Microsoft Theatre in downtown Los Angeles, broadcast in the US by Fox. For the fourth time in the award show’s history, there was no host and for the first time in the award show’s history, two British programmes, Fleabag and Chernobyl, won two of the three major awards. Let’s take a look at the Emmy Fashions best-dressed women.

English actress, playwright, producer, and writer Phoebe Waller-Bridge created wrote and starred in Channel 4’s Crashing in 2016 and the BBC’s series Fleabag from 2016 to 2019. She is also known as the creator, executive producer, and writer of Killing Eve, which she adapted from the Villanelle novel series by Luke Jennings.

At the Emmys, Phoebe wore a gorgeous light pink organza/tulle Monique Lhuillier gown with a plunging v-neckline embellished with silver sequins. Her hairstylist was Dennis Gots using Dyson and she wore Chanel makeup applied by the makeup artist Nikki DeRoest.

American actress Michelle Williams is known for her roles in Blue Valentine, Manchester by the Sea, My Week with Marilyn, Oz the Great and Powerful, The Greatest Showman, Venom, Dawson’s Creek, and playing Gwen Verdon in the miniseries Fosse/Verdon (2019).

At the Emmys, she won the award for ‘Lead Actress in a Limited Series or Movie’ for her work in Fosse/Verdon.

She wore an embellished Louis Vuitton sequin and embroidered dress which was fitted and strapless dress in greens, pinks, and golds. She has been the face of the brand since 2013. The designer noted that the hand-stitched floral embroidery took hundreds of hours to finish and featured 270,000 sequins, 65,000 beads (35,000 of them hand-dyed) and 5,300 Swarovski crystals.

Young Liverpudlian actress Jodie Comer is mostly known for her role as Villanelle in the series Killing Eve.

Jodie won an Emmy for ‘Lead Actress in a Drama Series’ for Killing Eve.

She wore a white, plunging neckline Tom Ford halterneck dress with cutouts and sleeves and she was styled by Elizabeth Saltzman. Her pulled-back hair was done by Mark Townsend.

American actress Julia Garner is known for her roles in The Americans, Maniac, Dirty John, The Perks of Being a Wallflower, Sin City: A Dame to Kill For, and the films Electrick Children, We Are What We Are, Grandma, and Tomato Red. She is best known, however, for playing Ruth Langmore in the Netflix series Ozark.

During this year’s Emmys, she won for ‘Outstanding Supporting Actress in a Drama Series’ for Ozark.

She wore a royal purple Cong Tri Spring 2020 collection gown with the perfect colour, cutouts, and draping along with her amber accessories.

English actress Maisie Williams made her professional debut as Arya Stark on HBO’s Game of Thrones. She has since starred in Doctor Who, The Falling, Early Man, and Then Came You.

She was nominated for an Emmy for ‘Outstanding Supporting Actress in a Drama Series’ for her work on Game of Thrones but lost to Ozark star Julia Garner.

She wore a custom-made dress designed by Reuben Selby and made by JW Anderson. The gown had a young, yet daring vibe in black with various silver embellishments and a mix of fabrics and straps.

Although flowing dresses have made a comeback in women’s fashion, many women look best when rocking a power suit. Do you want to be as stylish as these stunning Emmys guests? A Hand Tailored Suit has you covered. We create custom looks to make you look and feel like a celebrity. Want to be the best-dressed person in the room? Contact our tailoring team today. Here’s how to get in touch.

We publish blogs every week to keep you up-to-date with the latest in tailoring, celebrity style, and fashion-forward looks. Check out some of our most recent posts by visiting our blog page. 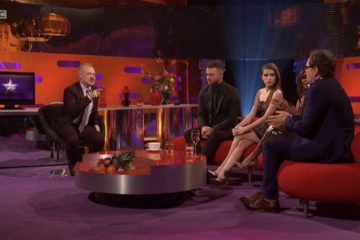 It’s the final episode of The Graham Norton Show for Series 26! For episode 19, Graham made a compilation video of the show’s highlights. Don’t worry, though! Series 27 will be back in April to give you Read more…

The Masked Singer is a popular British reality singing competition that aired on ITV this year. The show originated as a South Korean show called King of Mask Singer. The show’s presenters are Ken Jeong, Davina McCall, Read more…