For episode 9 of series 25, Graham Norton welcomed Thor star Chris Hemsworth who was promoting his new Men in Black: International film where he plays Agent H. Welsh actor Michael Sheen and David Tennant came on the show to promote their new show Good Omens with the screenplay written by Neil Gaiman and based on the late Terry Pratchett’s novels. Gloria Estefan talked about her new musical On Your Feet and the musical guest were The Jonas Brothers who performed their latest single, ‘Sucker.’ As usual, the guests did not disappoint with their fashion choices; let’s take a look at some of the suits on the show.

Australian actor Chris Hemsworth who got his start on the Australian soap Home and Away is most known for his role as Thor in the Marvel Cinematic Universe. He has also starred in The Cabin in the Woods, Snow White and the Huntsman, Red Dawn, Rush, and other films.

On the show, Chris wore a summery tan single-breasted two-piece suit with notched lapels. He wore a crisp white button-up shirt with his signature beard and hair slicked back. He accessorised with a watch with a brown leather strap and brown leather shoes.

In this clip, Chris discusses his prosthetic latex fat suit and how he got more cuddles.

Scottish actor David Tenant is known most famously for his role in Doctor Who, but also for his roles in Jessica Jones, Harry Potter and the Goblet of Fire, Broadchurch, and other roles.

For his appearance on Graham Norton, David wore an electric blue single-breasted suit with notched lapels and a lightly patterned purple shirt and a floral purple and tan tie with brown leather shoes.

In this clip, Graham reveals that David isn’t down with the latest emoji language in texting, despite being the father of five.

Welsh actor Michael Sheen is known for playing Tony Blair in the TV film The Deal as well as his roles in Underworld, The Twilight Saga, 30 Rock, and Midnight in Paris.

Michael wore a blue subtle large-print tartan single-breasted suit with notched lapels and button details on the sleeves. He paired the suit with a dark teal button-up shirt and a patterned brown pocket square. His final detail was wearing teal leather loafers with a darker teal stripe.

Michael Sheen helped his friend protect a Banksy work of art on his garage wall.

To finish off the looks, Graham wore a pastel pink single-breasted jacket with notched lapels and light-coloured buttons. He wore a black button-up shirt and black trousers. He pairs the look with a golden-tan hued patterned tie.

All of these suits would be perfect for summer get-togethers. Which suit and styling did you like the best? Would you opt for classic solid colours? A pastel? Or a pattern? Do you choose a tie and pocket square or go without? No matter your personal preference, we can create the perfect suit for your next occasion. Contact our tailoring team today. Be the most stylish person at the party!

We publish blogs each and every week to keep you up-to-date on the latest suit and outfit trends. Browse some of our most recent posts by visiting our blog page. 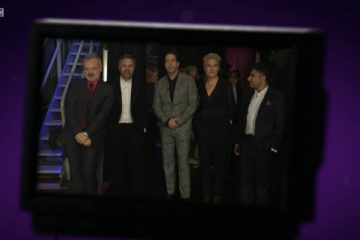 The 73rd British Academy of Film and Television Arts (or BAFTAs) Awards ceremony took place on Sunday, 2 February at The Royal Albert Hall in London with Graham Norton as host. The BAFTAs are an independent Read more…