Let’s recap on some of the fabulous suits displayed this season.

Wearing a cream single breasted suit with notched lapels, Sir Ian McKellen came on the show, sitting next to Michael Buble on the red sofa. He accessorised with a red Poppy. His best piece was a colourful shirt of what appears to be watercolour paint swatches. He also wore orange and white trainers and fun striped socks.

Actor Chris Pratt came on the show with Elizabeth Banks to promote their new Lego movie. He wore a classic dark grey-navy blue single breasted suit with a grey button-up shirt and matching tie underneath. In this clip—which we have written about before—he performs an impromptu English accent. What do you think of his attempt?

Nicole Kidman came on the show and sat next to Stephen Fry, who she is in awe of, and she discusses in the clip how she joined Instagram and how she caught a tarantula at her home in LA.

On the show she wore a fabulous single-breasted black suit with shaped shoulders (a la 80s). The lapels were rounded and the most interesting feature is the see-through shirt/bra combo with an attached tie feature at the high-necked neckline. She rounded out the look with simple earrings, tousled hair, and light makeup. What do you think of this look?

Promoting their new Fantastic Beasts film, Jude Law and Eddie Redmayne both wore fantastic suits to the show. Law channelled his inner Dumbledore with a brown stiff woollen/felt fabric on his three-piece suit. The lapels were wide and notched. His waistcoat had a high v-neck and he wore a silk scarf underneath, tucked in to form a V and underneath that he wore a simple grey t-shirt. It was an unusual combination, but seems to work well to create this dapper look.

In this clip, the two men discuss their secrecy clause in the film and the fans’ reaction to Jude Law being announced as Dumbledore.

Redmayne wore a black suit with a twill woven fabric and a classic white button up shirt and black tie.

We wrote about Carey Mulligan’s outfit before but this wonderful jacket with gold embroidery along the edge of the lapels looked chic with her black trousers and black button up with strappy black stilettoes shirt. Her couch-mate Michael Bublé wore a plum coloured suit with a plum shirt and tie.

Bublé talks about the sounds he ‘steals’ from those who inspired him in the clip below.

Two more colourful suits on the sofa with Ryan Gosling in a striking emerald green suit and blue-green button up shirt in a subtle stripe and Jodie Whittaker wore a wonderful colourful, geometric pantsuit and a classic black shirt underneath and black pointy-toe stilettos. Her single-breasted blazer and pant suit were cropped in the leg and she opted for a ¾ length sleeve.

In this clip, Whittaker discusses how she heard that she got the part in Dr Who.

In the following clip, Whittaker talks about the nickname of her Yorkshire hometown.

In this clip, Gosling talks about connections between he and Neil Armstrong, the real-life counterpart to his character in First Man.

Did any of these looks inspire you?

Which Graham Norton Show look do you remember most? Why don’t you tell us in the comments?

If any looks have inspired you, contact our tailoring team today to help orchestrate your perfect tailored look—anything from suits, trousers, overcoats, shirts, and more.

We publish blogs weekly to keep you up-to-date on suit trends, styles, cuts, drapery, and colours. Here are some of our recent posts you may like. 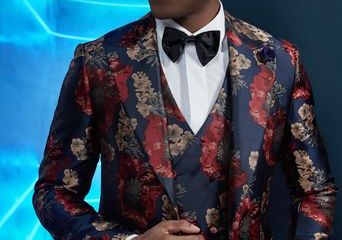