The 24th series has lined up some classic guests, including having Jamie Lee Curtis on the red sofa for the first time in her career. Take a look at our three suit picks for the second episode in the season of The Graham Norton Show. Here’s our 5 October suit roundup.

Jamie Lee Curtis of the Halloween franchise appears on the show to discuss her new Halloween film, forty years after the original. Jamie Lee wore a stunning white single-breasted suit with pointed lapels which contrasted beautifully with her silver hair and white shirt underneath. The trousers are slim fit and perfectly tailored and she wears simple jewellery, a silver chain necklace and her platinum wedding band. She discusses how she stumbled into acting by accident and had wanted to become a police officer. Take a look at the video – and admire the gorgeous suit.

The actor perhaps best known as the titular character in Mr Bean and his characters in Blackadder and Johnny English, appeared on The Graham Norton show this week. He teased about never giving up on a Mr Bean return, but he doubts it’s in the cards. He showed up wearing a dashing two-piece single breasted suit in a matte navy blue with notched lapels. He wore a crisp white shirt with a navy and blue horizontal striped tie. He wore his silver locks closely cropped and his signature eyebrows were darker than his hair. He tells a hilarious story about being in a car parts shop where a fan recognises the resemblance of Rowan and Mr Bean yet doesn’t believe that he is the actor himself. Take a look at the clip – and the suit.

Jeff Goldblum appeared on the show to discuss how he is shifting his career from actor to musician. He is releasing his debut album of jazz piano recordings – as he is a classically trained pianist. Jeff is known most of all for his role in the original Jurassic Park and Independence Day. On the show, Jeff wore a fashion-forward animal print blazer in silver-grey and black with matching button-up shirt and dark grey tie – all monochromatic. His trousers were slim-fitted black and he accessorised with a black and gold watch and thick black rimmed, trendy glasses. He wore his silver hair slicked back with an off-centre part. He looked handsome and charming. Have a look at a video of his interview below.

Which dashing look was your favourite?

Graham Norton’s guests are known for looking stylish and suave. Let us know in the comments which look was your absolute favourite and which look would you wear? If you have an event to go to and need a bespoke suit, contact our tailors today to discover your perfect style.

We publish blogs every week; here are some of our most recent posts: 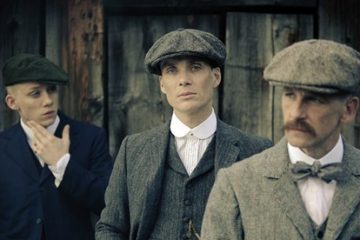