Season 4 of HBO’s Ballers is out – and we hope you’re anticipating episode 9 as we are – but have you seen the tailoring quality in the show? The American comedy-drama stars legend Dwayne ‘The Rock’ Johnson as Spencer Strasmore. The character is a retired NFL player turned financial manager of other NFL players. But what we’re most impressed about is the quality of the character’s suits (and other characters in the show). Let’s take a look at some of the top looks in the show.

Seven seconds into this video we see an amazing three-piece suit with a blue and white polka dot handkerchief. The fabric is grey and blue wool with a subtle stripe. The lapels are notched and the waistcoat fits like a glove. Spencer opts for a blue button-down shirt with the top two buttons undone and no tie. He looks sharp and sophisticated. What do you think?

When you’re as bulky and muscular as Dwayne Johnson, it’s a little difficult to pull off a more tailored look unless you get the absolute right fit and measurements, which means off the rack isn’t the best choice. Dwayne’s character Spencer pulls off a perfect shirt and waistcoat look with the grey waistcoat with open pockets and pointed lapels and a rich dark blue button-down shirt. He uses tinted purple aviators to complete the look and just a touch of stubble. Do you see how fantastic that visible stitching looks around the lapels? In the second clip, his fitted trousers with a peek of belt are visible and the small buttons of the waistcoat complement the look. The tailor has made plenty of allowance in the armholes to allow easy movement.

Let’s not forget the amazing salmon pink check suit that Spencer pulled off in Season 2. The single-breasted blazer with notched lapels fitted perfectly as did the cut of the trousers and the brown leather shoes. The complementary colour of the tie with the subtle contrasting patterning worked wonders as did the matching handkerchief in his pocket. A plain white shirt allows this look not to be too overwhelming and busy. This look – with the brown buttons and brown belt – was incredibly sharp. It takes a brave man to pull of pink, but it looks fantastic when they do. Do you love this look too? 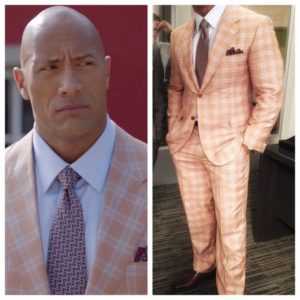 Getting Down to Business

This light grey suit and blue and white striped shirt – and always with the pocket square – Spencer looks like he means business. The crisp cotton shirt looks sharp. In these tailored looks, Spencer opts to go without a tie for comfort and style. Do you love this more casual look or are you more of a waistcoat person?

Spencer loves a bit of grey, but he wears it so well. Those tinted aviators are back and this time he wears a just-grey-off-white button down with a purple and grey patterned tie in a very subtle hue. His grey suit is impeccably tailored and the heather-purple pocket square looks sharp. He wears pointed lapels again the button is subtle on this single-breasted blazer.

Spencer rocks some new sunglasses – square in shape – along with his khaki-grey suit with a pink button down and baby blue patterned tie. It’s difficult to pull of baby blue and pink in the same lok but Spencer does it. This character can handle some bold choices. The blazer is simpler and the cut slopes down with Spencer’s built up neck muscles showcasing the notched lapels and the single-breasted jacket.

Our final look showcase is Spencer’s ‘I mean business’ distinguished pinstriped three piece suit cut to perfection. The front pieces look great as Spencer moves through the lobby. The look is more monochromatic with a dark grey suit, a crisp white cotton shirt, and a grey-blue and white paisley pattern tie. Just the right amount of cuff can be seen at the end of the sleeve and the pocket square matches the tie impeccably. He can be seen accessorising with a leather duffel (full of money). Because of the pinstripe fabric. As he moves, the lapels almost blend in seamlessly – as if there are none – and the waistcoat has a very slight lapel that blends in too, almost vicar-like in style. But this suit is really fresh with a new take on a classic three-piece. Watch the scene to bask in the full glory of the suit.

Tell Us Your Favourite!

Which of these street style looks strikes your fancy?

“We have been honoured to have been contacted by Mr Johnson’s tailor direct to take credit for these exceptional pieces of work/art.”

Master Tailor Robert Mata (Our hat is dipped in respect Sir) his details can be found below.

We publish blogs weekly; here are some of our most recent posts: